A couple of quick updates copied from our Facebook pages for you, sorry for the delay in updating after the previous very stressful post.  Mark is back in the hospital again following Round 4, which is of course not very fun, but not quite as much a big deal as what we were worried about a week ago.

Just realized we left everyone hanging last week. We ended up spending an extra night in the hospital so a CT scan could be done. The CT scan showed no air! The doctors weren't exactly sure what happened, but we are so thankful for everyone's prayers. We were able to come home Saturday afternoon. Since then Mark has been doing well - he had even gained half a pound when he went in to his appointment today!!! His platelets were quite low today, so he had to have platelets. He had quite a bit of pre-medication and did fine. He even managed to get some homework done today. We are so, so thankful for this period of sunshine. Love you all!

Some have asked if Mark will be back in school following treatment. Actually, he is back in already, as the school year has begun. We are keeping him in motion so that rehab back to normal speed after Christmas won't be such a marathon. 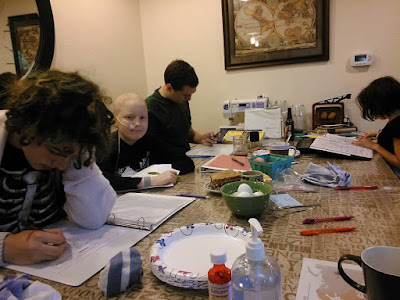 Back in the hospital for what seems to be our requisite post-chemo "unplanned" admit. Mark woke up not feeling great. Meds helped a bit and he made it through the first part of the school day before he started to complain about pain in his stomach and head, followed by my noticing he felt warm. Fever of 100.9 around 1, 101.9 at 2, so they told us to come in. It was up to 102.8 when we got here. His counts are low, so it's an automatic 48 hour stay.

Still at the hospital. Mark's oxygen levels dipped on Thursday and required "blow by" oxygen for most of the day. Friday his levels were better, but there was crackling in his lungs, so they ordered an x-ray. The x-ray was clear so they gave him some medicine that encourages the release of extra fluids from the body. He had what is known as wet lungs, which is when they flood the body with fluids to help bring the fever down, etc, but some extra settles in the lungs. They sound clear now, and although his oxygen levels are not back up to his typical 99/100%, they are much improved and considered passable. The doctors said there was a slight chance we might go home on Saturday, but more likely they'd keep us for the weekend in hopes that his blood counts would start coming up.

As of this afternoon, Mark's fever bumped back up over 101, so Sunday or Monday is presently his next reasonable shot of coming home to recover before Round 5.
Posted by Frank at 8:42 PM 1 comment: