It has been a very long time since I have posted an update.  For this delay I am both sorry, and not sorry.

I am sorry, because I know that many (most) of you have been faithfully following Mark's story from one post to the next, keeping appraised of his victories and challenges, and to have dropped those updates without warning before his treatment was complete was not very kind.  I am sorry.

I am not sorry, because the year of his treatment and six months of recovery to follow has been devastatingly brutal on our family, driving all of us to the brinks of emotional and/or physical exhaustion.  If we had needed to keep going, we would have, of course, but seeing a light at the end of the tunnel of this course of treatment sort of set a finish line for us, and we allowed our reserves to be expended at the finish line, and figuratively pretty much collapsed at that point.  Not even two months later we were forced to make an unplanned move when our landlord unexpectedly decided to sell the home we've lived in for seven years.  Keeping the followers appraised at that point was not a priority any more. As a family, we needed to hide and recover for a while. I am not sorry.

Thank you for understanding.

It has been over six months since Mark's chemo ended.  He has rebounded, well... remarkably.  If you had not previously known what he went through, you would not see any outward sign of his fight and his recovery.  His strength is not all the way back, but he is fully functioning again and able to take care of himself.  He's been seen to occasionally do some climbing on playgrounds and in trees.  His cognitive functions appear outwardly to have returned to normal, but internally he still gets frustrated when he tries to concentrate on something hard.  He still spends more than the normal amount of time resting, but he has been good about pushing himself to do more, and needing to rest is a reasonable outcome of that.

He is completely off of all of his medications now, his weight has returned to near normal, and a few weeks ago we got the results of his second post-chemo MRI.  Thankfully and praising God I can report that his scans are so far still all-clear.  Last week he was able to attend Camp Ukandu, a weeklong summer camp for survivors and siblings, something he really wanted to do last year but was not strong enough to participate.  He had a great time, it was a superhero-themed week.  He wore his suede shoes and apparently unveiled some notable dance moves at some point.  The camp newsletter was released with an article about "Firedrake" (Mark's camp name), and going into detail about his new dance superhero identity: "Super Suede"!  Camp Ukandu's volunteer staff is largely made up of the oncology staff of nearby hospitals and clinics, so a fair number of the counselors and camp staff were already known, something putting any new camper to ease.  Mark's primary oncologist, Dr. Jason Glover, may have had Mark's favorite camp name: "Pond Scum". 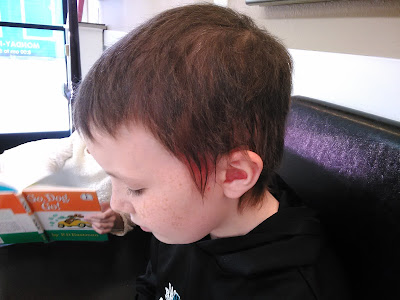 And then yesterday, for the first time since the end of Summer 2014 shortly before his diagnosis almost a year and a half ago, Mark required the attention of a barber.  Since his hair all grew back in at the same time, it was mostly normal on top but very shaggy in back.  His hair has not grown back in its original red, but rather a dark brown, more like the rest of the family. It may or may not eventually return to its original color.  I forgot to get a picture of him post-trim, but here he is just prior.  Pay no mind to the red coloring in front of his ear, that is a vestige of the paint he had applied as part of the Super Suede persona.  Several showers later, it still hasn't come all the way out yet!  Visiting the barbershop seemed mostly insignificant at the time, but when considered fully, the barbershop visit was a huge milestone.


In closing, again, sorry but not sorry for the long delay between posts, I trust you all to understand that.  But from the bottom of our hearts, please know how grateful we have been and continue to be for your support and prayers.  Mark is still not out of the woods long term, but it is nice for now to be able to exhale a while, and for Mark to get back to being a kid again.  God bless you all.  More pictures below.